From Wikipedia, the free encyclopedia

Jump to navigationJump to search

Swimmer’s itch or cercarial dermatitis, is a short-term allergic immune reaction occurring in the skin of humans that have been infected by water-borne schistosomes. Symptoms, which include itchy, raised papules, commonly occur within 1–2 days of infection and do not generally last more than 2–3 weeks. However, people repeatedly exposed to cercariae develop heavier symptoms with faster onset.[1] Cercarial dermatitis is common in freshwater, brackish and marine habitats worldwide.[2] Incidence may be on the rise, although this may also be attributed to better monitoring. Nevertheless, the condition has been regarded as emerging infectious disease.[3]

There are no permanent effects to people from this condition.[4] Orally administered hydroxyzine, an antihistamine, is sometimes prescribed to treat swimmer’s itch and similar dermal allergic reactions. In addition, bathing in oatmeal, baking soda, or Epsom salts can also provide relief of symptoms.[5]

Swimmer’s itch probably has been around as long as humans. The condition was known to exist as early as the 1800s, but it was not until 1928 that a biologist found that the dermatitis was caused by the larval stage of a group of flatworm parasites in the family Schistosomatidae.[6] The genera most commonly associated with swimmer’s itch in humans are Trichobilharzia[1] and Gigantobilharzia. It can also be caused by schistosome parasites of non-avian vertebrates, such as Schistosomatium douthitti, which infects snails and rodents. Other taxa reported to cause the reaction include Bilharziella polonica and Schistosoma bovis. In marine habitats, especially along the coasts, swimmer’s itch can occur as well.[7]

These parasites use both freshwater snails and vertebrates as hosts in their parasitic life cycles as follows: 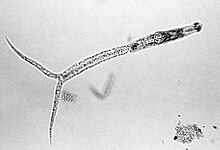 Humans usually become infected after swimming in lakes or other bodies of slow-moving fresh water. Some laboratory evidence indicates snails shed cercariae most intensely in the morning and on sunny days, and exposure to water in these conditions may therefore increase risk. Duration of swimming is positively correlated with increased risk of infection in Europe[9] and North America,[10] and shallow inshore waters may harbour higher densities of cercariae than open waters offshore. Onshore winds are thought to cause cercariae to accumulate along shorelines.[11] Studies of infested lakes and outbreaks in Europe and North America have found cases where infection risk appears to be evenly distributed around the margins of water bodies[9] as well as instances where risk increases in endemic swimmer’s itch “hotspots”.[11] Children may become infected more frequently and more intensely than adults but this probably reflects their tendency to swim for longer periods inshore, where cercariae also concentrate.[12] Stimuli for cercarial penetration into host skin include unsaturated fatty acids, such as linoleic and linolenic acids. These substances occur naturally in human skin and are found in sun lotions and creams based on plant oils.

Various strategies targeting the mollusc and avian hosts of schistosomes, have been used by lakeside residents in recreational areas of North America to deal with outbreaks of swimmer’s itch. In Michigan, for decades, authorities used copper sulfate as a molluscicide to reduce snail host populations and thereby the incidence of swimmer’s itch. The results with this agent have been inconclusive, possibly because:

More importantly, perhaps, copper sulfate is toxic to more than just molluscs, and the effects of its use on aquatic ecosystems are not well understood.

Another method targeting the snail host, mechanical disturbance of snail habitat, has been also tried in some areas of North America[11] and Lake Annecy in France, with promising results. Some work in Michigan suggests that administering praziquantel to hatchling waterfowl can reduce local swimmer’s itch rates in humans.[14] Work on schistosomiasis showed that water-resistant topical applications of the common insect repellent DEET prevented schistosomes from penetrating the skin of mice.[15] Public education of risk factors, a good alternative to the aforementioned interventionist strategies, can also reduce human exposure to cercariae.

TOO MUCH WIND! 10 Wind Turbine Fails